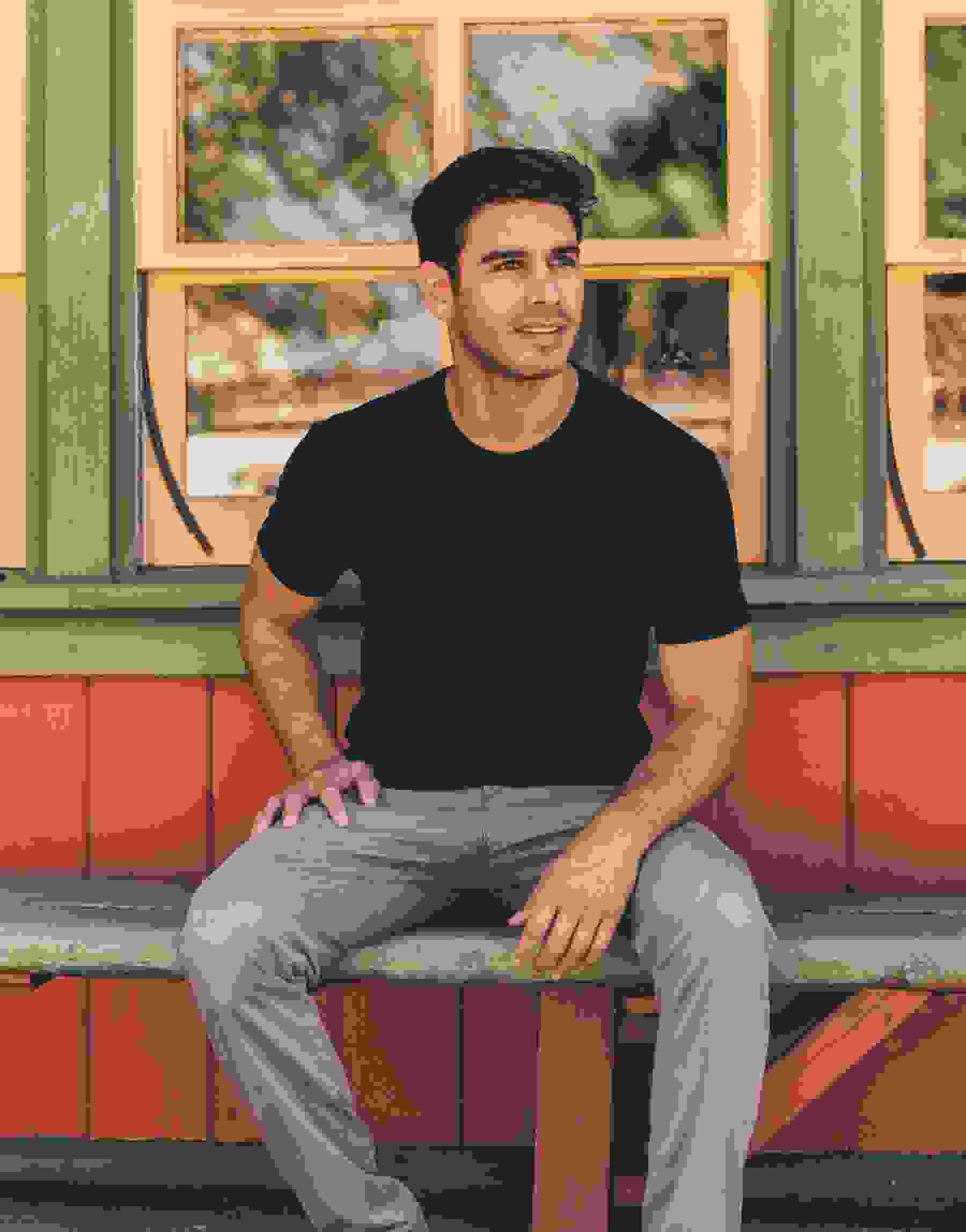 Fashion plays an intricate, elaborate matter in movies and television shows, and it’s all too easy to recall impressive period clothing or high-end designer pieces when discussing the iconic looks of characters in media. In reviewing a character’s memorable style, we can too readily overlook the striking qualities of basic everyday items — zip-up hoodies, lightweight pullovers, and the like. Comfort isn’t challenging, which allows wardrobe basics to prove more foundational for a strong character to build upon.

Basics become iconic when it's not about what you wear, but how you wear it. I may not be an expert in cinematic fashion, but I know an iconic look when I see one — and men in plain tees have served up some of the most iconic looks to ever hit the big or small screen. These men didn't wear their respective tee like just another clothing item; they wore it like a personality trait.

Let's take a look at a few of our favorites.

1. Marlon Brando as Stanley Kowalski in A Streetcar Named Desire

What could I say, except that Stanley Kowalski took men's basics and made the look so damn iconic that it's impossible to imagine there could’ve been another fashion choice that would’ve achieved even a fraction of the desired effect? Despite his brutal temper, Kowalski is downright hypnotizing throughout A Streetcar Named Desire — and his wardrobe plays an integral part. We see him rotate through a navy crew neck tee, a white crew neck tee, and a white tank top as a brooding, hulking presence. Kowalski’s muscular frame fills out each snug fit, making for an inseparable, electrifying co-existence of man and garment.

2. James Dean as Jim Stark in Rebel Without A Cause

It was surely inevitable that the immortal Hollywood rebel with a heart of gold would take the simplicity and vulnerability of a white crew neck tee and make it iconic. In a movie full of tender masculinity and tragic love, Jim Stark imbues the tee shirt he wears with those same qualities. He doesn't just wear his heart on his sleeve; he wears it on the whole of his tee, threading it through the cotton fabric as he twists within himself. Even without Rebel Without a Cause’s signature red windbreaker jacket, we all could benefit from feeling a bit soft in our tees.

T-Bird gang leader Danny Zuko brought charm, conviviality, and melodic rascality, to his collection of white tees, making moves and causing trouble in a look that every man wants to emulate at some point — a white crew neck tee, a leather jacket, a strong pair of dark jeans, and an insanely good head of slicked-back hair. As far as fashion nostalgia goes, it’s hard to top the rogue nonchalance of the greaser aesthetic. Sure, Grease celebrates the rough and tough through song and whimsy, but Zuko’s slick ducktail, heart-snatching pout, and outta-control hips were basically accessories to be layered with that crisp white tee.

Hank Moody took a black crew neck tee and made it his own. There's something key about the ever-present black shirt of Californication — a reoccurring uniform of sorts, a look as sharp, confident, and cool as it is laid back, effortless, and practically indifferent. It’s an undeniable extension of the writerly lothario himself, making for an irresistible appearance that presents life in Southern California as casual, breezy, and just so damn appealing. It’s a basic look, but it goes to show that sometimes it all just depends on how you wear it.

A definitive king of cool, Arthur “Fonzie” Fonzarelli played pal to every good guy, threat to every troublemaker, and eye candy for every woman at Arnold's Drive-In. "The Fonz" took greaser style and made it approachable, smiling and shifting between brown and black leather jackets. Front and center, though, was always his tucked-in white crew neck tees — though he had a tendency to mix it up on occasion with black crew neck tees. The motorcycle-riding, jukebox-slapping, and shark-jumping hero of suburbia only did cool things and he only wore tees.

Honorable Mention: Bruce Springsteen on Born in the U.S.A.

Although neither movie nor show, it would be profoundly remiss of us to not mention Bruce Springsteen when recounting iconic tees. Sure, the case could be made that there’s hardly anything “The Boss” does without being iconic, but Springsteen’s white crew neck tee, paired with a well-worn pair of blue jeans, on the cover of Born in the U.S.A. became instantly burnt into the cultural consciousness, forever embodying the classic look of tucking a white tee into denim. Even as a shot from the back, catching merely torso to thigh, Springsteen showcased an unshakeable aura of cool.