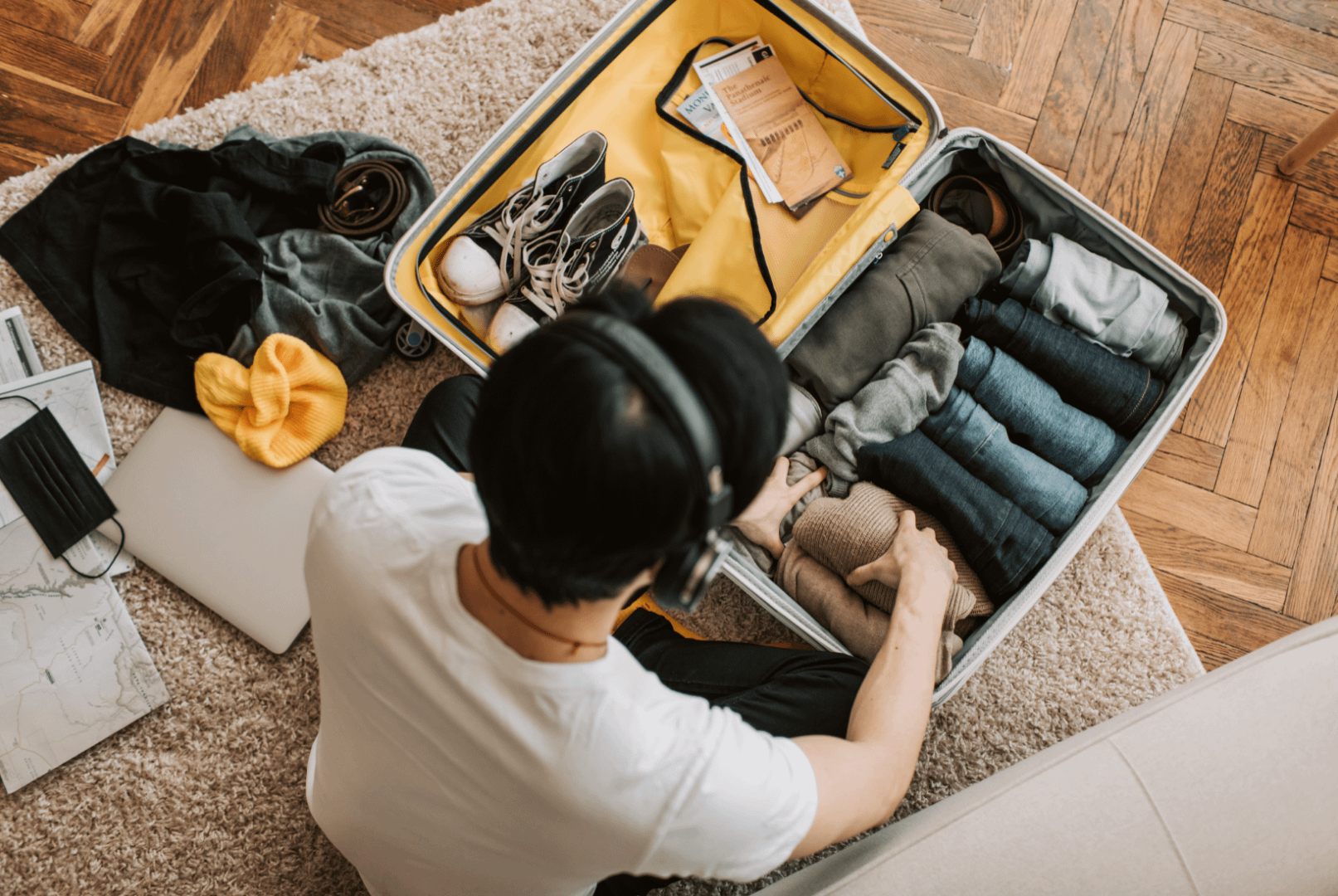 Man in a Suitcase: Dressing Right While Jet-Setting Can Be a Challenge

We’re a species of hoarding by nature, but there are essentials when it comes to clothing. So what should you take with you when you’re away for most of every month? I used to know.

For several years, it felt like I lived on the road, reporting from the farthest flung corners of the world. One month I’d be in the Bahamas; the next in Barcelona. A fortnight later, I’d have a few days at home before heading off to Prague.

See the world in green, whether it's a military crew neck tee, a military v-neck tee, or a military short sleeve henley.

It was a never-ending cycle of traveling that, while exciting in some ways, was a logistical nightmare. Money had to be juggled, changed into various currencies, and when I returned home each time, it felt like I was never properly dressed for the occasion.

Have you ever touched down in searing heat while wearing a fleece pullover and jeans, with a thick coat draped over your arm? How about breezing off the plane in a short sleeve henley and organic cotton toweling shorts, only to be greeted by overcast clouds throwing down rain? I’ve done both, and it was a while before I realized the culprit was poor planning, not bad luck.

When packing for a week away from home, as was my average stint in foreign climes, I eventually realized that taking only what I needed was an essential practice. There was no point to taking three dress shirts if I planned on a single night out while I was there. Shorts were another luxury that I could really only afford to take from time to time.

Pack light as best as you can, whether you're island-hopping in tank tops, city-strutting in soft t-shirts, or hitting the mountain trails in men's outerwear.

Looking up the weather in my upcoming location was an early idea, but it was flawed. The reality is that few parts of the world strictly adhere to an app’s suspicion of what the estimated temperature might be in the future.

When it came to stuffing my suitcase with t-shirts, polo shirts, and long sleeve henleys, it was a balancing act that even Philippe Petit couldn’t top. If I was somewhere for a week, then ten shirts typically proved sufficient. But which ones? I felt like I needed a tee for every day, but the reality was that I did better with longer-sleeved items, such as a lightweight sweatshirt or a light hoodie. They were notably adaptable to weather conditions, as they weren’t too thick or too thin. Over time, I got used to taking enough tees to change every day, along with some long-sleeve shirts that could adapt for work, yet still look smart with a nicer pair of bottoms.

The other thing I learned, and this is a good tip for anyone packing for any reason, is that no matter how much I thought I knew what the weather would be like, due to a country’s consistent weather, my own visit could totally coincide with an unforeseen precipitation in a country associated with a hot climate or vice versa. You get what happens, not what you expect.

I once worked for a week on a tropical island, and what happened is by no means a complaint about such a destination gig. The hours were long, and I was on my feet 12-14 hours each day, but it was a great trip. I did, however, have two ambitions before boarding the plane on a misty tarmac in Britain: I wanted to lay out in the sun and go for a run along the Atlantic Ocean. I ended up going one for two.

Hit the road and still look fresh in white by packing a white button-up, a white short sleeve henley, and a white hooded long sleeve.

Catching sun, I quickly discovered, was out of the question — unless I was prepared to wait by the pool, freezing to death in my swimming trunks and waiting for a break in clouds that looked like someone had slung a duvet over the continent.

If I couldn’t, even in theory, work on my “tan,” then I could at least run, come rain or come shine — or so I very ambitiously thought. Setting out one morning shortly after sun-up, I jogged lightly from the resort to the coastline. Once there, a bit overcast with seemingly no rain on the horizon, I decided to see if I could beat my personal best at running three miles, a move that would ultimately prove downright comical.

As I picked up my pace, the sky broke and the heavens opened. When I say it rained, the better description would be that the sea decided to rise up, formulate a game plan from above, and subsequently attack me. It was a torrential downpour, the likes of which I haven’t seen before or since. My trainers began to fill with water as I dashed down the beach in even more labored fashion across the formerly hard sand at the water’s shifting edge.

In my goofier sprint, I passed by people strolling happily back from the direction I was heading, their amused grins aimed at my trainers. As I plowed on, I understood why. Another tip for you here is that when running on beaches, it’s highly advisable to run barefoot. I thought that trainers would protect my feet from the kind of heavy impact that sand might cause. In the end, though, my feet may have been cushioned, but they were splashing around gallons of seawater being heartily absorbed by my trainers.

I finished my run along the Atlantic Ocean and, although it felt more like I had run an entire city marathon than a few miles along the coast, I was still happy to have done it.

Sometimes, what we think we’ll see when we arrive at our destination isn’t what looms into view as the plane door opens. But if we pack the right clothes, we can be ready for anything and dressed to suit whatever the weather.