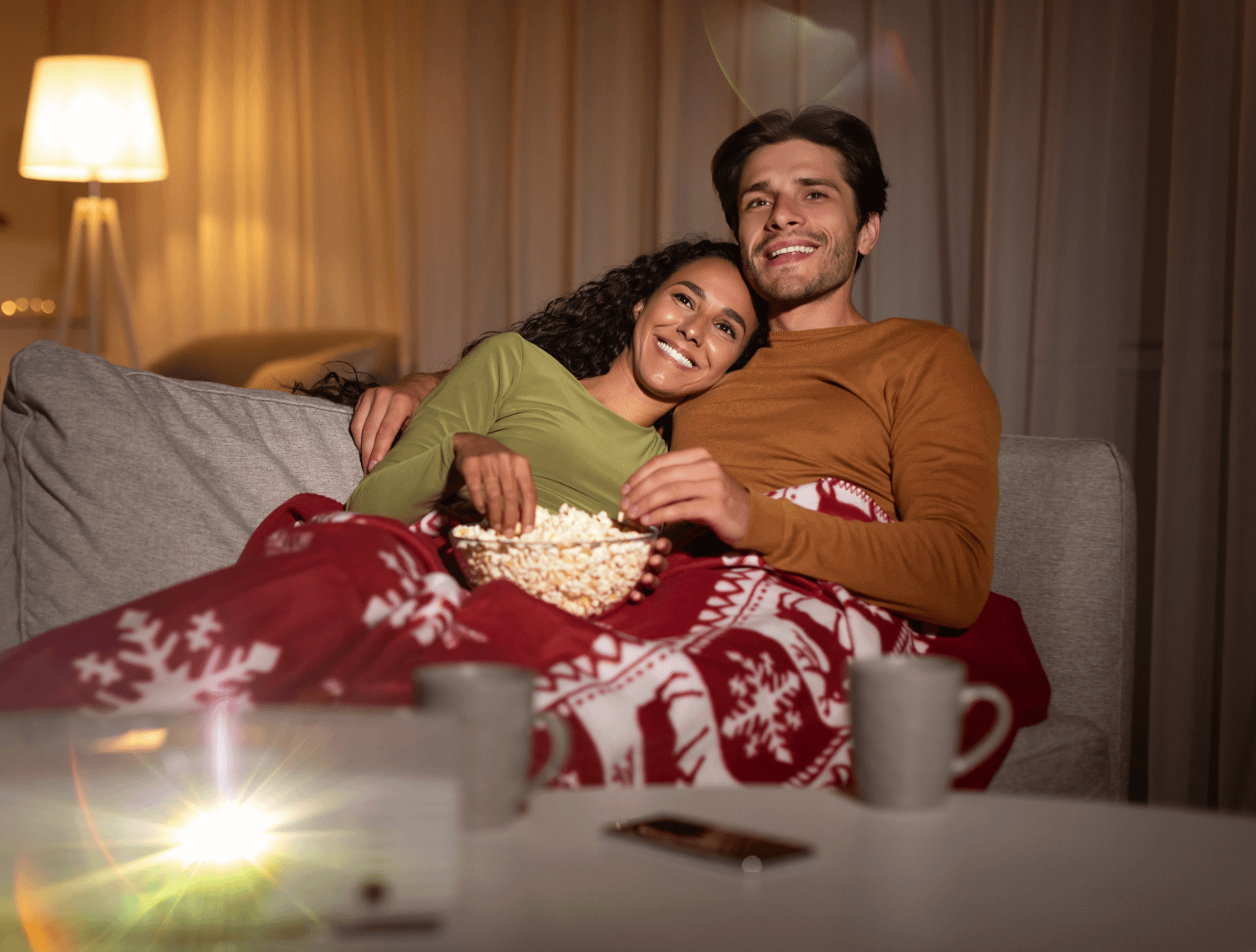 ‘Tis the season to snuggle up in your favorite pullover hoodie, lightweight pullover, or hooded t-shirt, grab a big buttery bowl of popcorn, and flip on the tube for some holiday cheer. No matter if you’re in the mood for a wholesome Christmas flick, or an f-bomb filled fiasco with your favorite bad Santa, these classic movies deliver.

For the delightful madness of Chevy Chase in his prime, watch National Lampoon's Christmas Vacation. In this 1989 cult classic, Clark Griswold, played by Chase, has big dreams of a merry family Christmas...that soon go up in flames when his hilarious extended family, including his dimwitted cousin, arrive.

Things come to a head on Christmas Eve with a botched kidnapping and a visit from the SWAT team instead of St. Nick. It’s a hilarious trainwreck from start to finish, and no holiday season is complete without it.

Fun Fact: A squirrel jumps out of the Griswold family tree in one famous scene. Unfortunately for the cast, the trained squirrel died a day before the scene was shot, so they had to use an untrained one.

Bail on the pink bunny suit from your aunt for our way cooler Brick Torrey Polo.

A Christmas Story will hit you right in the nostalgia and feels. This 1983 holiday classic famously chronicles the woes of Ralphie Parker, who only wants a Red Ryder B.B. Gun for Christmas. Unfortunately for Ralphie, he’s denied by every adult he meets, including Santa.

After receiving a full pink bunny pajama getup that, in fairness, arguably looks super comfy, Ralphie finally gets his Red Ryder B.B. Gun, only to nearly shoot his eye out and shatter his glasses. Despite the depressing climax to Ralphie’s quest, it’s the minor plotlines that really make this flick sing, including the infamous leg lamp and Ralphie’s father’s ongoing feud with the dogs next door.

Fun Fact: Jack Nicholson almost played Ralphie’s dad, except his acting fee was too high for the studio to swing it.

Go full Grinch steez in our Flash Green V-Neck (except, you know, be the Grinch at the end of the movie, all heart-three-sizes-too-big mode).

How the Grinch Stole Christmas

There have been a few versions of the Dr. Seuss Christmas Classic, but Jim Carrey’s 2000 rendition of the holiday’s best and worst green-eyed monster is a modern classic. Not only is it the only live-action version of How the Grinch Stole Christmas, with some fantastic visual effects that still hold up, but it’s got its fair share of adult humor too.

The star-studded cast really brings it to life with Carrey as the Grinch, Anthony Hopkins narrating, and an adorable early-aughts Taylor Momsen as Cindy Lou Who.

Fun Fact: The Grinch costume took a total of eight hours to put on and was so mentally and physically taxing that Carrey actually took a CIA class in torture endurance to be able to act in it.

Elf features an adorably clueless Will Ferrell as Buddy, a human raised as an elf who leaves the North Pole in search of his dad in big, bad New York City. It’s been a holiday staple since its 2003 release. Buddy’s mishaps are hilarious and mostly wholesome, from his apex snowball war skills to his penchant for sugary treats.

There are some pretty iconic scenes in Elf, including one where Miles Finch, played by Peter Dinklage, loses it after being called an elf by a confused and well-intentioned Buddy. Of course, the adventure has a happy ending where everyone sings a song and believes in Santa once again.

Fun Fact: Will Ferrell wasn’t cut out for an elf’s diet. Apparently, he got terrible headaches and couldn’t sleep after his characters’ sugar/maple syrup binges.

Dress like you run things (with a heart of gold and no need for some freaky-deaky trifecta of ghosts on Christmas Eve). Go with a Navy Long Sleeve Henley.

Scrooged is Bill Murray’s arguably most underrated work. This wild 1988 retelling of the classic A Christmas Carol story is a masterclass in ‘80s comedy, featuring icons Bobcat Goldthwait and Carol Kane to riff with Murray at his best.

Although some versions of A Christmas Carol can get a little musty and even a bit preachy, Murray keeps it light, screwball, and moderately raunchy. It’s an enjoyable, often-overlooked classic that you need to put on your must-see list.

Nothing bad about a Black Zip-Up Hoodie.

Bad Santa will never qualify as a family holiday classic, thanks to its gallows humor and very adult themes, but that doesn’t make it any less hilarious. Billy Bob Thorton stars as Willie T. Soke, the titular “Bad Santa” who celebrates the season by robbing department stores.

Despite his flaws, Soke has a soft spot for a troubled kid named Thurman Merman, and he gets his gross shot at redemption at the end. Although Thorton is excellent, the best role belongs to the late, great Bernie Mac, who plays Gin, the mall’s security chief with questionable ethics of his own.

Fun Fact: The characters in Bad Santa drop the f-bomb more than 150 times, landing this movie right on the Naughty List.

Our Garnet Long Sleeve Crew Neck will get you into the holiday spirit with zero interest in being home alone.

1990’s Home Alone is one of the most successful holiday movies of all time, grossing $476.7 million dollars worldwide and launching Macaulay Culkin to meteoric child stardom. It’s hilarious, wholesome, and features Joe Pesci at his PG-rated best.

Kevin, played by Culkin, is accidentally left behind when his family jets off to Paris. He winds up reuniting an older man with his estranged son and foiling the infamous Wet Bandits with a series of innovative- and candidly, sociopathic- booby traps, all while learning that the true joy of Christmas is spending it with those who you love.

So if you're fine need of a lazy day of hibernating in front of the television, it's time to put one or several of these holiday classics in your queue.